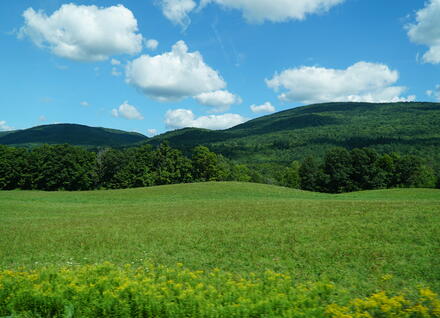 Most toxic air pollutants in Vermont come from mobile sources—such as cars, trucks, and other motorized vehicles.

Air pollution is monitored at stations in Underhill, Burlington, Rutland, and Bennington.

Outdoor air can contain pollutants. These pollutants can be the result of human activity (car exhaust or trash burning) or from natural sources (pollen or radon). Air pollution has been linked to specific health problems—such as asthma, heart disease, and lung cancer.

Overall, Vermont's air quality is good. Vermont has much less traffic congestion, commerce and industry that can contribute to poor air quality. Even so, there are days when high levels of fine particulate matter in the air make it risky to be outdoors and physically active, especially for older adults, children, and people with chronic conditions such as asthma.

In Vermont, these higher risk days are often during periods of hot, humid weather. Particulates can aggravate existing heart and lung diseases, lower the body's defenses against inhaled materials, and damage lung tissue.

What is being done to improve air quality?

Under the Clean Air Act of 1970, the Environmental Protection Agency (EPA) began to set limits or standards on how much of a pollutant can be in the air anywhere in the United States. The goal of these limits is to help ensure that all Americans have the same basic health and environmental protections.

The Centers for Disease Control and Prevention works closely with the EPA to publish air quality data on the National Environmental Public Health Tracking Network and to help better understand how air pollution affects our health.

How does Vermont monitor air quality?

Each state develops its own plan on how to monitor air under the Clean Air Act. The Vermont Department of Environmental Conservation (DEC) maintains an air quality monitoring program to measure ozone, nitrogen oxides, carbon monoxide, particulate matter, sulfur dioxide, and toxic elements. Air pollution is monitored at stations in Underhill, Burlington, Rutland, and Bennington. Learn more about air quality monitoring in Vermont.

Which pollutants are included in the Vermont Tracking portal?

Ozone is a gas that you cannot see or smell. Ozone occurs naturally in the sky about 10 to 30 miles above the Earth’s surface. Sometimes, this ozone is called "good ozone" because it forms a layer that protects life on earth from the sun’s harmful rays. Ground-level ozone can be harmful to your health and the environment.

Ground-level ozone forms when pollutants from cars and trucks, power plants, factories and other sources come in contact with each other in heat and sunlight. Factors such as weather conditions and intensity of sunlight also play a part in how ozone is formed. Ground-level ozone is one of the biggest parts of smog, and it is usually worse in the summer months.

What is particulate matter?

Particle pollution, or particulate matter, consists of particles that are in the air. These particles come from dust, dirt, soot and smoke, and little drops of liquid. Some particles, such as soot or smoke, are large or dark enough to be seen. Other particles are so small that you cannot see them.

Particles bigger than 10 micrometers can irritate your eyes, nose and throat but do not usually reach your lungs. Ten micrometers is about seven times thinner than one human hair.

Fine and ultrafine particles are the size of most concern because they are most likely to cause health problems. Their small size allows them to get into the deep part of your lungs and even into your blood. Data about fine particulate matter (also known as PM2.5) are included in the Vermont Tracking portal.