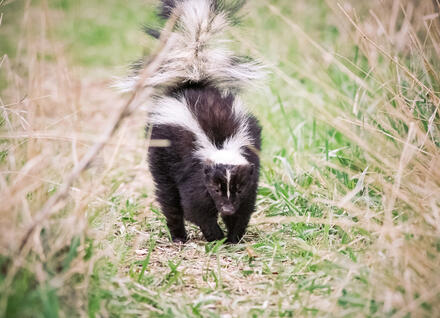 Rabies is a deadly viral disease of the brain that infects mammals. In Vermont, rabies is most commonly found in wild animals such as raccoons, skunks, foxes, bats and woodchucks. Cats, dogs and livestock can also get rabies if they have not been vaccinated for rabies. Hundreds of cases of animal rabies have been reported throughout Vermont since 1992 and will continue to be a problem for many years.

Rabies is a disease of the central nervous system. Rabid animals show a change in their normal behavior, but you cannot tell whether an animal has rabies simply by looking at it. Animals may show unusual aggression, extreme depression or bizarre behavior. In humans, early rabies symptoms include fever, headache and general weakness. As the disease progresses, symptoms may include insomnia, anxiety, confusion, slight or partial paralysis, excitation, hallucinations, agitation, hypersalivation (increase in saliva), difficulty swallowing, and hydrophobia (fear of water). Death will usually occur within days of these symptoms.

The virus is spread through the bite of an infected animal. Non-bite exposures very rarely result in rabies. People cannot get rabies indirectly, such as petting or handling animals, or from contact with urine, blood or feces.

The Vermont Department of Health leads efforts to prevent rabies infections in humans and manage animals that may have exposed humans to rabies. This work includes:

The Rabies Bait Drop Project is an interstate/international cooperative effort by research veterinarians and wildlife biologists to keep raccoon rabies from spreading across Vermont and the Canadian border. The annual rabies vaccine bait drop generally takes place in August. Vaccine in the form of sweet-scented bait attractive to raccoons and skunks is dropped from aircraft in rural areas and placed by hand in large residential areas. The project's research is directed by the U.S. Department of Agriculture’s Wildlife Services, in collaboration with the Vermont Departments of Health and Fish & Wildlife, and the Agency of Agriculture, Food and Markets.

Information for the public

What do I do if an animal bites me or my pet?

Call your veterinarian if you believe your pet was exposed to a potentially rabid animal; they will be able to decide if your pet is at risk for rabies and tell you what steps to follow next.

For more information on rabies exposure, visit the CDC website.

How can I help prevent rabies in my pet and myself?

Do not touch or pick up unfamiliar or wild animals – even baby animals – or try to feed them or make them into pets. Report unknown or strangely behaving animals to your town's animal control officer. If the animal is wild, contact the Rabies Hotline or a Game Warden.

Make sure trash cans and recycling bins are tightly closed, and do not leave pet food outside. Feed pets inside the house and keep pets indoors at night. If they are out during the day, keep them on a leash or within a closed space. Pets that roam free are more likely to be exposed to a rabid animal. Make sure that all family pets get rabies shots and keep shots up to date. Animals can be vaccinated by a veterinarian or at a rabies clinic.

For more information on rabies in domestic animals visit the CDC website.

What should I do if I find a bat in my house?

If you find a bat in your room after waking up, or if you find a bat in a room with a person or animal who may not recognize the risk – like a child, a person with a cognitive disability, an intoxicated person, or a pet – call your doctor or veterinarian.

If you're certain that no people or pets have been in direct contact with the bat, confine it to a room and leave a window open to allow it to exit to the outdoors. If the bat doesn't leave, call the Rabies Hotline or a pest management company for assistance on how to remove the animal from your home.

For more information about bats and rabies, visit the Vermont Fish & Wildlife Department and CDC websites.

What should I do if I find injured or orphaned wildlife?

If you find an injured or orphaned animal, do not pick it up. If you touch an animal that can carry rabies, even young animals, they may bite or scratch you and spread the deadly disease. Instead, contact the Rabies Hotline at 1-800-4-RABIES or a licensed Vermont wildlife rehabilitator. Read more about injured and orphaned wildlife.

Where can I get vaccinated for rabies?

Most Vermonters have a low risk of coming in contact with the rabies virus. However, some people have a higher level of risk, such as those who work directly with animals that could have rabies, or those who travel to parts of the world where rabies is common and access to medical care is limited. These people should receive rabies pre-exposure prophylaxis (PrEP), a series of rabies vaccine doses given before possible exposure to the rabies virus.

Rabies PrEP is not widely available since it’s only recommended for some people. Here’s where you may be able to obtain rabies PrEP:

What do I do with a pet that has bitten a person?

Regardless of vaccination status, any apparently healthy dog, cat, or ferret that bites a human should be confined and observed for 10 days from the time of the bite under the supervision of the Town Health Officer. It is necessary that the biting pet completes the full 10-day observation period to confirm that they were not shedding rabies virus. The animal should not be vaccinated for rabies during the observation period.

Any illness during observation must be reported to the Town Health Officer. If the animal shows signs suggestive of rabies, it must be euthanized and sent to Vermont Department of Health Laboratory for testing. Veterinarians must call the Health Department’s Epidemiology Program (802-863-7240) before submitting an animal for testing.

Management of domestic animals that bite humans other than cats, dogs, and ferrets depend on the species, circumstances of the bite, epidemiology of rabies in the area, and the animal’s history, current health status, and potential for exposure to rabies. Farm animals, such as horses, cows, goats and sheep, that do not seem sick can usually be watched on site under the supervision of the Town Health Officer or veterinarian.

What if a pet is euthanized or dies within ten days of biting a person?

If the animal becomes ill with signs suggestive of rabies, dies before the tenth day, or if an observation period cannot be completed, consult the Health Department’s Epidemiology Program. Rabies testing at the Health Department Lab should be done to definitively rule out rabies in the biting animal. Rabies testing is only necessary in animals that may have exposed humans, or in animals with high diagnostic probability of rabies.

What do I do with a pet that was ‘exposed’ to rabies?

Any animal bitten or scratched by a wild animal not available for testing must be regarded as having been exposed to rabies, including bite wounds of unknown origin. All exposed pets should be seen by a veterinarian immediately after exposure for wound assessment.

Dogs, cats, or ferrets with documentation of current or overdue rabies vaccination that are exposed to a potentially rabid animal must be revaccinated immediately and kept under the owner’s control and observed for 45 days. Because rabies is fatal, an unvaccinated dog, cat, or ferret that is exposed to a rabid animal should be euthanized so there is no risk that rabies can spread. If an owner refuses euthanasia, administer a rabies vaccine within 96 hours of exposure, followed by strict quarantine – four months for dogs and cats and six months for ferrets – precluding direct contact with people or other animals. If vaccination is delayed, the quarantine period in dogs and cats may be extended to six months, considering the severity of exposure and length of delay of vaccination. Animals other than dogs, cats, or ferrets should be evaluated on a case by case basis.

Adherence to a regular rabies vaccine schedule is critical to protect animals against recognized and unrecognized rabies exposures.

How do I submit a specimen for rabies testing?

All specimens sent to the Health Department Lab must be pre-approved for rabies testing by calling the Health Department Epidemiology Program at 1-800-640-4374 (Vermont only) or 802-863-7240 or the USDA Vermont Rabies Hotline at 1-800-4-RABIES. Only high-risk human exposure cases require testing on weekends and holidays; all others will be tested during regular business hours.

Specimens for rabies testing should be sent to the Lab in a rabies submission kit. Rabies submission kits can be obtained from the Lab or from one of the Health Department’s District Offices. Many Game Wardens, State Police stations, and veterinary clinics have rabies kits on hand.

If there is not a rabies submission kit available, specimens may be packed in double plastic bags with cold packs (never ice cubes) inside a cardboard box, preferably insulated. The specimen must be accompanied by a Request for Rabies Examination Form for each specimen, placed in an envelope and taped to the outside of the box. It is essential that the outside of the box be clearly marked with “Rabies Specimen,” along with the physical address of the Health Department Lab:

How do I report animal bites and rabies postexposure prophylaxis (rPEP)?

All animal bites must be reported to the local Town Health Officer or other town official within 24 hours of actual or constructive notice by calling or faxing a completed Town Health Officer Animal Bite Report Form. If a town official cannot be reached, report pertinent information (name and phone number of patient, and the name, phone number, and address of animal owner) to the Health Department Epidemiology Program at 802-863-7240 or fax the report form to 802-951-4061.

Health care providers must report the administration of rabies post-exposure prophylaxis by faxing a completed Rabies Postexposure Prophylaxis Report Form to the Health Department’s Epidemiology Program at 802-951-4061 or securely e-mailing it to [email protected].

When should I consider giving rabies postexposure prophylaxis (rPEP)?

Rabies PEP should be considered for any person bitten by a wild animal or a domestic animal exhibiting signs of rabies that is not available for observation or testing. If a bat was found in the same room as a sleeping person or child and you cannot definitively rule out that they were bitten or scratched by the bat or test the bat for rabies, initiation of rPEP should be considered. Wild animals that have potentially exposed humans, including bats, should be tested for rabies at the Health Department Lab. Results are usually available within 48 hours of receipt. Small mammals like squirrels, rats, mice, hamsters, guinea pigs, gerbils, chipmunks, rabbits, and hares are almost never found to be infected with rabies so usually do not need to be tested and almost never require rPEP.

If a biting dog, cat, or ferret is available and was not exhibiting signs of rabies at the time of bite, rPEP should be delayed until after the completion of a ten-day observation of the animal, enforced by the Town Health Officer. If the animal does not become ill during observation, rPEP is not necessary. If the animal is not available for observation, an attempt should be made to search for the animal. If it cannot be found, or if the patient is not 100% certain the found animal is the same animal that bit them, consult with the Health Department’s Epidemiology Program at 802-863-7240.

When should I give rabies pre-exposure prophylaxis?

Serial antibody titer checks – usually every two years – are recommended for persons at elevated risk for unrecognized exposures to rabies virus. Booster doses of vaccine are recommended when serologic titers fall below the recommended level of <0.5 International Units per milliliter (IU/mL) by the rapid fluorescent focus inhibition test (RFFIT).

Forms and Reports
Guides and Information