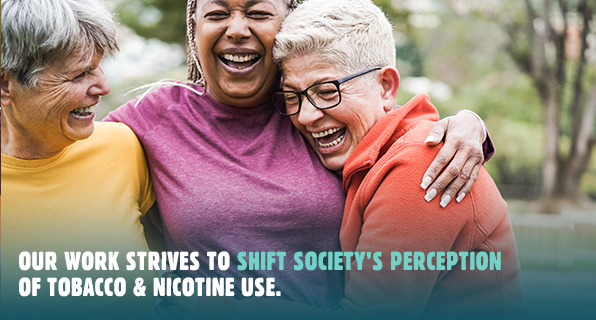 Inherent in these goals is a requirement for robust evaluation strategies and data collection, which—at the highest level—tell us how we’re doing on the previously mentioned goals. We can also use data to help tell the stories of Vermonters impacted by tobacco and nicotine and how our efforts have moved the needle.

The Health Department’s Health Surveillance division gathers Vermont-specific data on tobacco use and quit behaviors among adults and youth, as well as perceptions of harm and the support and impact of current and future policies/programs.

The following reports are just some of the many data sources that have been used to steer the program’s work with Tobacco Control and Prevention:

Substance Use and Pregnancy Report

We are proud that the Tobacco Control Program has had a positive impact across Vermont, and Vermonters young and old have been impacted by our partnerships, initiatives and campaigns. Read more about what’s been done in the Success Stories below.

Following a surge in youth vaping in 2019, the Tobacco Control Program launched a unique campaign to reach this audience and convey the serious risks of vaping.

In 2019, youth vaping surged in the U.S. and in Vermont, with 26% of Vermonters aged 12-25 regularly vaping (up from 12% in 2017). Concerned that this uptick signaled a new generation of nicotine addicted individuals, the Tobacco Control Program worked quickly to create a compelling new brand and campaign designed to convey the very real risks of vaping.

Thanks to the Policy and Communication Evaluation (PACE VT) study, near real-time monitoring of Unhyped’s reach and impact was possible.

The results showed the following:

Collaboration with the Clara Martin Center

In an effort to reduce high rates of tobacco use among people with mental health and substance misuse disorders, the Tobacco Control Program partnered with a trusted organization already serving this population to increase Vermonters’ access to on-site quit support.

Individuals with mental health or substance misuse disorders are often overlooked for quit support, in part because smoking is generally accepted as a crutch or coping tool. Hoping to turn the tide on this trend, the Tobacco Control Program provided funding to treatment organizations, like the Clara Martin Center, to expand on-site, quit-smoking services.

With funding from the Tobacco Control Program, Clara Martin Center, a behavioral health and substance use treatment facility, was able to increase the availability and duration of its tobacco cessation services within Community Rehabilitation Services (CRT) facilities and other Department of Mental Health Designated Agencies.

The Center’s Wellness Team is also working to improve how wellness data is collected within their agency and support other organizations and agencies interested in starting wellness programming.

Thanks to monthly data provided by the Clara Martin Center, the Tobacco Control Program is able to monitor real-time changes in tobacco use and quit progress at the population level. So far, this collaboration has proved successful in helping many clients quit or reduce their tobacco use.

In Vermont, the rate of tobacco use among pregnant and postpartum people is more than twice the national average. Among Vermonters with Medicaid and those uninsured, the rate of tobacco use is nearly 3x higher than those with private insurance. In an effort to increase quit attempts among these populations, the Vermont Tobacco Program developed a program offering financial incentives to individuals who completed Quitline coaching sessions.

In 2012, 802quits began offering up to $65 in quit tobacco incentives to certain high-risk individuals. Thanks to the success of this effort, as of March 2021, the Tobacco Control Program now offers:

Currently, Vermont is the only state to offer all three incentives. Additionally, the Tobacco Control Program deployed a robust, paid digital media campaign to raise awareness and drive enrollment among the groups of interest, as well as health care providers.

Between March and June 2021, financial incentives were given to 4 pregnant or postpartum callers, 30 menthol callers and 155 Medicaid or uninsured callers.

Additionally, this effort generated these results:

For more details on 802Quits and its incentive programs, visit https://802quits.org/

Partners for Prevention, a Rutland-based Tobacco Control Program partner, collaborated with Rutland area schools and Stafford Technical Center’s Video Communications Program in an effort to educate students about the risks of vaping using content created by and for youth.

Vermont youth are particularly at risk of vaping and e-cigarette use. In fact, data from the Vermont Youth Risk Behavior Survey and the Vermont Youth Project indicate that 25% of Vermont teens are vaping regularly. In response to this alarming trend, Partners in Prevention, a community network addressing the risks of alcohol and other drug misuse, launched an initiative where teens and tweens were tasked with creating anti-vaping messaging.

Using a mix of in-person education, conversations and resources to educate youth and teens about the dangers of vaping, Partners for Prevention has led education programs in multiple schools. In 2021 and 2022, students were challenged to create anti-vaping content to educate their peers and empower them to make positive change.

With the help of the Stafford Technical Center’s Video Communications Program, the students launched a video contest for their peers to create anti-vaping Public Service Announcements (PSAs). The community voted for their top choices and the top three earned prizes.

The videos were extremely well received by the schools and the community at large—even garnering media attention! The winning videos were then shown to students to assist in vaping education. Since this initial campaign, Rutland and Fair Haven youth councils have reached out to Partners for Prevention, wanting to create their own anti-vaping PSAs.