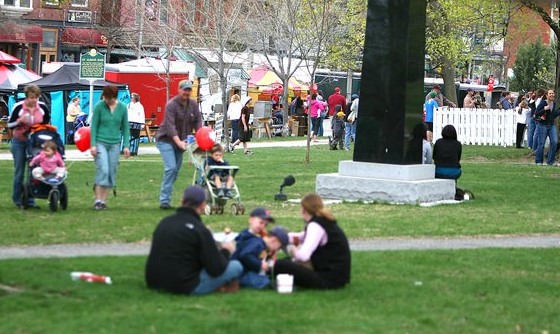 Like communities around the world, Vermont cities and towns face the challenge of safe needle disposal. While this is a statewide issue, there are different approaches that communities may choose based on what is locally feasible, sustainable and effective.

Communities and individuals can use the information below to develop safe, efficient and locally-appropriate needle disposal strategies. Visit the Vermont Needle Disposal Initiative to learn more about the partnership of state agencies, police departments, business members and other groups that recognize the responsibility we all share to safely dispose of needles.

Found a Needle? Learn the Right Way to Throw It Away

This toolkit was developed by the Barre District Office of Local Health in partnership with the Greater Barre Safe Sharps Alliance. It is a comprehensive safe needle disposal toolkit that provides a strategic framework for assessing the problem of unsafe needle disposal in a local community. The toolkit also outlines options for addressing the issue, and includes tips for building partnerships, developing and executing a plan and evaluating the project, among other resources.

In this abbreviated toolkit from the Environmental Protection Agency, communities can find a shorter overview of options for addressing the issue and available resources.

In 2017, the Deputy Fire Chief for the City of Barre, Joseph Aldsworth, grew concerned with finding increasing numbers of sharps around the community - in parks, playgrounds, and public restrooms. Joe’s fellow first responders, EMT and law enforcement officers, were collecting an increasing number of sharps, both around the community and on the persons with whom they were coming in contact. Local landlords were finding bags of sharps left behind in apartments from vacated tenants. To Joe, it seemed as if “syringes were the new soda cans when it came to litter.”

Uncomfortable with dumping the syringes into the trash, Joe resorted to collecting the sharps in a five-gallon tub that sat on top of the drug takeback collection box at the Public Safety building. Eventually, the tub filled up. Joe was able to

connect with the local hospital, Central Vermont Medical Center, to help him dispose of and incinerate the sharps. However, calls to Public Safety from community members wondering what to do with found sharps increased and the tub continued to fill. It was clear something more needed to be done to address the issue of improperly disposed of needles in and around the city.

Without resources to tackle the issue on his own, Joe reached out to several organizations he thought could help: Vermont CARES, which operated a Syringe Exchange Program in Barre; the Vermont Department of Health Barre District Office of Local Health; and Central Vermont Medical Center. From there, as awareness of the need to address this issue grew, more organizations joined to create what is now the Greater Barre Safe Sharps Disposal Alliance. Together, the Alliance assessed the issue, came to a consensus that improperly disposed of sharps were a community-wide problem, and agreed that a collaborative effort was needed to address the problem. It gathered information on what was known about the issue, shared the information, and created an action plan. With support from the Vermont Department of Health to implement a pilot project, the Alliance designed a community education and outreach campaign and purchased large sharps collection kiosks and wall units that were installed in and around the city. These efforts lead to Vermont’s first major community-wide effort to create multiple options for safe sharps disposal and raise public awareness about these options free of stigma.

For more information about the project, contact the Barre Office of Local Health at 802-479-4200 or [email protected].

The Chief of Police described the implementation of a city-wide policy to install and maintain sharps disposal wall units in all city-controlled buildings (i.e. fire station, recreation center, city hall, senior activity center), except for schools. The City of Montpelier Fire Department is responsible for collecting the sharps and disposes of them through their regulated medical waste vendor. The city also conducts education and outreach efforts about proper sharps disposal through their annual Green Up Day event, educating the public to use hard plastic containers to dispose of sharps, if found. City leaders also collaborated with the Agency of Transportation to address improperly disposed of sharps in local commuter parking lots; deciding to place sharps disposal wall units in lots where sharps were often found. The City of Montpelier and its residents are supportive of this initiative.

Health care providers at North Country Hospital System in Newport reported an issue with area residents dropping off coffee containers and shoe boxes filled with syringes at the hospital for disposal. The Facilities Director investigated the scope of the issue and met with health care staff to discuss possible solutions. The final solution was to purchase a free-standing sharps disposal kiosk and to place it near the emergency room, which is accessible to the public. The Facilities Director monitors the sharps volume and the hospital disposes of the waste at regular intervals using their waste disposal vendor.

The St. Johnsbury Office of Local Health, in collaboration with the Drug Abuse Resistance Team (DART), a grassroot community group working to support prevention, intervention, and recovery within their community, responded to a concern in the St. Johnsbury area regarding used needles in public places. As the local police department was not always available to retrieve the needles, the members of DART arranged to work with our local VTCares staff to hold classes to instruct local volunteers how to safely pick up and dispose of used needles. The Kingdom Recovery Center set up groups to do regular rounds to local ‘hot spots’ to ensure needles were picked up and the local police department dispatchers were asked to notify the Recovery Center if a needle was reported. Once reported, a group text was sent out to the group allowing the volunteer closest to the location the do the pick-up. We are fortunate to have the services of VTCares locally as well as the support of willing volunteers to ensure our community stays safe.

Schools in Vermont are required to follow the Agency of Natural Resources' Regulated Medical Waste Procedure. The proper disposal method depends on how much regulated medical waste is produced or gathered at your school. Use the decision tree below to find the best fit for your school's needs.

Businesses and organizations in Vermont are required to follow the Agency of Natural Resources' Regulated Medical Waste Procedure. The proper disposal method depends on how much regulated medical waste is produced or gathered at your business. Use the decision tree below to find the best fit for your business's needs.

Licensed health care providers in Vermont are required to follow the Agency of Natural Resources' Regulated Medical Waste Procedure. The proper disposal method depends on how much regulated medical waste is produced or gathered at your practice. Use the decision tree below to find the best fit for your practice's needs.

Businesses and organizations in Vermont are required to follow the Agency of Natural Resources' Regulated Medical Waste Procedure. The proper disposal method depends on how much regulated medical waste is produced or gathered at your business. Use the decision tree below to find the best fit for your business's needs.

Call 2-1-1 for information on safe needle disposal locations in your area, or contact us through the Vermont Department of Health.

About the vermont needle disposal initiative 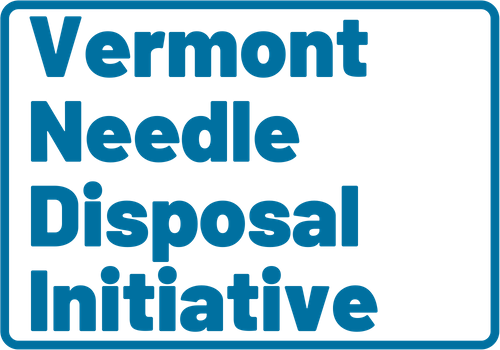 Mission: To ensure the safe and appropriate disposal of every needle, syringe or lancet in Vermont through public education, policy proposals and collaboration.

Vision: By collaborating with statewide partners, sharing resources and raising community awareness about safe needle disposal, we can reduce the number of improperly discarded needles and lower the risk for injury in our communities.