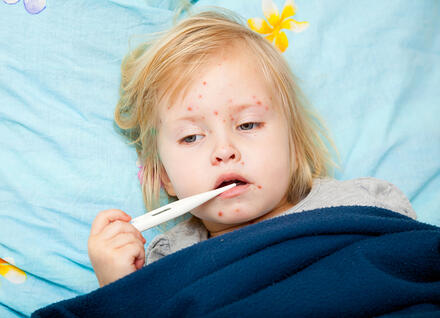 Chickenpox is a contagious disease caused by the varicella-zoster virus (VZV). It causes a blister-like rash, itching, tiredness, and fever. The rash appears first on the stomach, back and face and can spread over the entire body causing between 250 and 500 itchy blisters. These lesions present in two to four successive crops. The person will eventually have lesions in all stages of development. Chickenpox can be serious, especially in babies, adults, and people with weakened immune systems. The best way to prevent chickenpox is to get the chickenpox vaccine.

Shingles, also known as zoster or herpes zoster, is a painful skin rash. It is caused by the varicella zoster virus (VZV), the same virus that causes chickenpox. After a person recovers from chickenpox, the virus stays dormant (inactive) in the body. For reasons that are not fully known, the virus can reactivate years later, causing shingles. There is a shingles vaccine, approved in 2006, available as a single dose recommended for adults 50 years and older for prevention of shingles. Vaccine recipients 50-59 years had a 67% reduced risk of developing zoster; recipients 60-69 years had a 64% risk of developing zoster. All recipients have less neuralgia, or pain, associated with shingles if they do develop a rash. 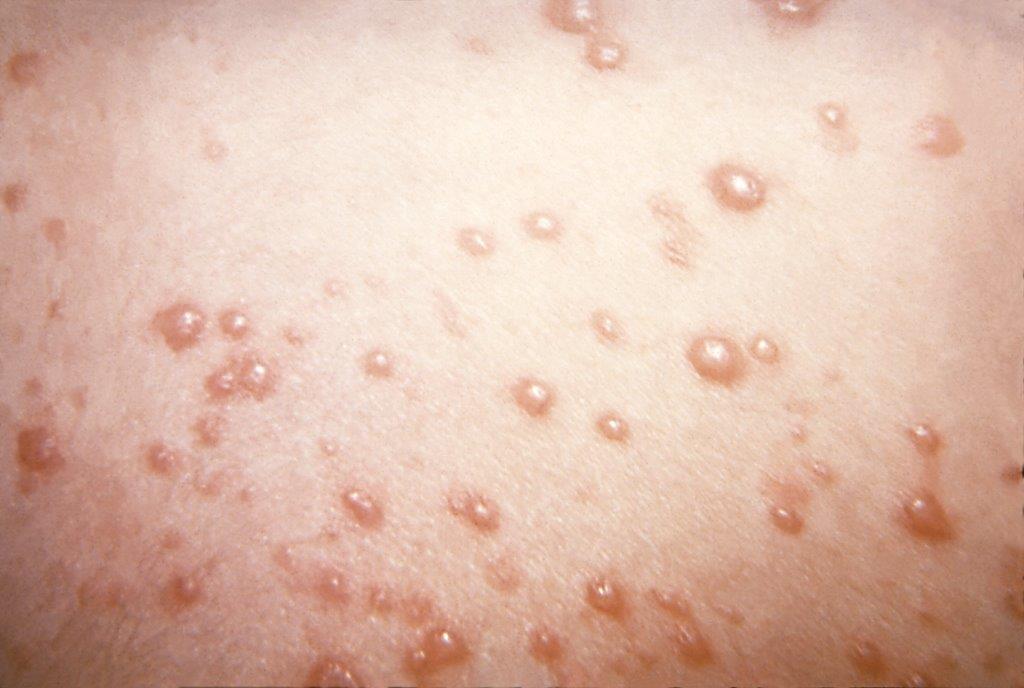 The classic symptom of chickenpox is a rash that turns into itchy, fluid-filled blisters that eventually form scabs. The rash may first show up on the face, chest, and back then spread to the rest of the body, including the mucous membranes, inside the mouth, eyelids, or genital area. It usually takes about one week for all the blisters to crust over and become scabs, potentially spreading over the entire body, causing between 250 and 500 blisters. Chickenpox illness usually lasts about five to seven days, but could last up to three weeks. Children usually miss five to six days of school or childcare due to chickenpox.

The Vermont Department of Health Laboratory performs an IgG antibody test for varicella. This blood test will indicate if the tested person is immune to varicella, i.e. has had natural infection or received vaccine. This can help to determine if a person exposed to varicella would benefit from immunization to prevent infection.

A test of the skin lesions at the physician's office can confirm varicella disease. Specimens from skin lesions are best collected by taking the scab off a vesicle and rubbing the base of the lesion with a polyester swab.

Chickenpox is very contagious. Prior to the availability of vaccine, infection was universal with approximately three to four million cases in the U.S each year. Chickenpox spreads easily from people with chickenpox to others who have never had the disease or were not vaccinated. The virus spreads through the air by sneezing and coughing or through contact with someone’s chickenpox rash. People who have never had chickenpox can get infected by just being in the same room with someone who has the disease. Prior to the varicella vaccine, chickenpox was a common childhood disease. Most adults born before 1980 have had chickenpox as a child.

Chickenpox can also be spread from people with shingles to others who have never had chickenpox or received the chickenpox vaccine. This can happen if a person has close contact with shingles blisters. In these cases, a person would develop chickenpox, not shingles.

A person with chickenpox can spread the disease one to two days before the onset of fever and malaise, before he or she gets the rash, until all chickenpox blisters have formed scabs (usually five to seven days). It takes about two weeks (from 10 to 21 days) after exposure to a person with chickenpox or shingles for someone to develop chickenpox. If persons vaccinated for chickenpox get the disease, the symptoms are likely to be milder. However, they can still spread it to others. For most people, getting chickenpox once provides immunity for life.

Before the varicella vaccine was widely available in the U.S., almost everyone had varicella in childhood. In the 1990s (the pre-vaccine era) there were more than 10,000 hospitalizations, and over 100 deaths annually. Varicella was an expected disease of childhood. Now, routine varicella vaccination has nearly eliminated chickenpox-related deaths among children. Even though some people who are vaccinated against chickenpox may still get the disease, it is usually milder with fewer red spots or blisters and little or no fever.

Vermont was involved in a study on the two-dose regimen, using data available on outbreaks during 2005-2012. The conclusion was that the routine two-dose varicella vaccination program appears to have significantly reduced the number, size and duration of varicella outbreaks in the US. High two-dose vaccine coverage should greatly decrease outbreaks that have been reported among groups of school children with high vaccination coverage.

Each year, the chickenpox vaccine prevents an estimated 3.5 million cases in the United States. Two doses of vaccine are recommended and are 98% effective at preventing disease. In the 2015-16 school year, 95.6% of all Vermont students (K-12) enrolled in public and independent schools met the varicella immunization requirements.

Varicella vaccine protects against a very uncomfortable and sometimes serious disease. Those who are vaccinated not only protect themselves but others in the community too young to be vaccinated, or with an underlying illness that makes it impossible for them to be immunized. There is also another not-insignificant benefit: a typical case of chickenpox can cost a family over $350 from out-of-pocket and other costs associated with loss of wages due to absence from work.

More information on the chickenpox vaccine

Antiviral medications are recommended for people with chickenpox who are more likely to develop serious disease including:

Acyclovir, an antiviral medication, is licensed for the treatment of chickenpox. The medication works best if it is given within the first 24 hours after the rash starts.

Vermont data were used from outbreaks from 2005 through 2012. The conclusion was that the routine 2-dose varicella vaccination program appears to have significantly reduced the number, size and duration of varicella outbreaks in the US.