Lead in Drinking Water in Schools

Lead in Drinking Water in Schools 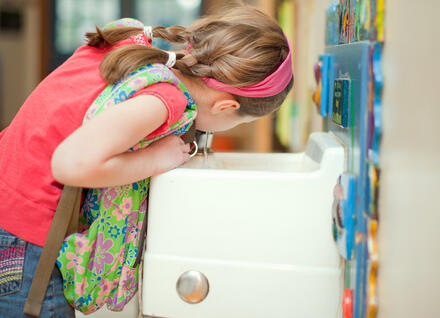 Unless you test for it, there’s no way of knowing if lead is in drinking water.

Children can come in contact with lead in many ways. Lead exposure poses a special risk to young children because they absorb lead into their systems more easily than adults do. Lead can slow down growth, impair development and learning, and can cause behavior problems.

Act 66 (2019) requires all Vermont school districts, supervisory unions, independent schools and child care providers to test their drinking and cooking water for lead. If lead is found at or above the action level of 4 parts per billion (ppb), the school or child care provider must immediately take the fixture out of service and take steps to eliminate or reduce the amount of lead to below 4 ppb. This law builds on the 2017 water testing pilot project in which 16 schools participated.

NEW: First Round of Testing

The first round of testing was completed from June 2019 through December 2021. During this round, 98% of Vermont schools and child care providers tested over 15,000 taps used for drinking and cooking and took steps to ensure lead levels were below 4 ppb. Here are some key findings:

Learn more about key findings from the first round of testing
For more details, read the full report.

There will be more rounds of testing. Taps at schools and child care facilities will need to be tested every three years according to the schedule in the rule.

go to the lead in drinking water results website

Why is lead a concern?

Exposure to lead is a public health concern in Vermont. Lead is a highly toxic metal that is harmful to human health. It has been commonly used in many household, industrial and automobile products—such as paint, solder, batteries, brass, car radiators, bullets, pottery, etc.

There is no safe level of lead in the body, but lead poisoning is preventable. Lead can harm anyone, but children under the age of six are at special risk. Children are most susceptible to the effects of lead because their bodies are still developing and they absorb lead into their systems more easily than adults. Even low blood lead levels in a child’s body can slow down growth, impair development and learning, and can cause behavior problems. Most children who have lead poisoning or high levels of lead exposure do not look or act sick.

When are schools required to test?

The first round of testing was completed on December 31, 2021. See the results

There are phased deadlines in 2024 and 2025 for schools to complete their next round of testing. After the second round of testing, schools will also be required to test every three years.

Ongoing testing is important because lead levels at the tap can change due to water quality changes and the breakdown of plumbing components over time. We encourage facilities to strive for the lowest possible lead levels, ideally below 1 ppb. If a tap tests lower than 1 ppb for three testing cycles, that tap is not required to be tested again.

What is the Vermont Health Advisory Level and what does it mean?

Because there is no safe level of lead in the body, a Vermont Health Advisory Level of 1 ppb has been established. This is the lowest level that can be reliably measured in water. It is consistent with the American Academy of Pediatrics recommendation that taps in schools should not have lead levels above 1 ppb.

Should children have their blood tested for lead if lead has been detected in the drinking water at their school?

In short, probably not.

Any time a child’s blood lead test shows a detectable level, the Health Department tries to identify the source of the exposure. By testing all schools and requiring remediation, we will be certain that any exposure from drinking water at a school has been identified and reduced.

When deciding whether to test a child for lead in response to a school’s water test results, it is important to understand that the possible exposure to lead from drinking the water at a school may only be a part of the picture. There are other possible sources of lead (see the next question), and the amount in drinking water can add to a child's overall lead exposure. We also can’t know how much water an individual child drinks at school, so the amount of exposure is unknown.

All children should be screened for lead at ages 1 and 2 by their health care providers. If you have additional questions, call the Healthy Homes Lead Poisoning Prevention Program at 802-863-7220 or 800-439-8550 (toll-free in Vermont), or talk to your child’s health care provider.

Learn about lead hazards and how to prevent lead poisoning

Are there other ways children can be exposed to lead?

Exposure to lead is a public health concern in Vermont. Possible sources include dust from chipping or peeling lead-based paint, toys, keys, jewelry, pottery, dishes, contaminated soil, old plumbing pipes and fixtures, imported candy and foods, and antique, vintage and salvaged goods. While a major source of lead poisoning in Vermont children is paint, lead in plumbing pipes and fixtures can add to a child’s overall lead exposure. Learn about lead hazards and how to prevent lead poisoning

The Health Department, Agency of Natural Resources, and the Agency of Education led a joint pilot project from November 2017 to March 2018 to gather information about lead levels in the drinking water of Vermont schools. This project provided a small number of schools with the opportunity to receive one-on-one assistance and save money during the testing process.