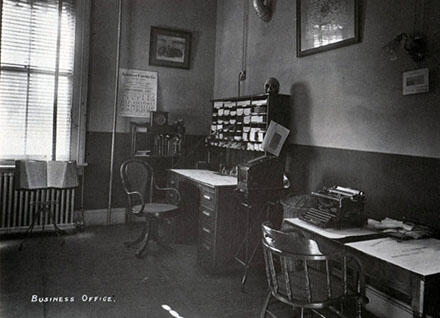 Public health efforts began in Vermont, as elsewhere, out of a need to protect the public from diseases caused mostly by unsafe water supplies and contagion.

Over 100 years ago, the first Vermont State Board of Health could little envision the many accomplishments that public health efforts would achieve in the state – several of which were recognized throughout the country as pioneering efforts. Nor could anyone have imagined the scope of public health services expected by our citizens today and provided by Vermont’s public health workers.

Here is a summary of important moments in our history from our 1986 calendar project 100 Years of Public Health in Vermont 1886-1986. 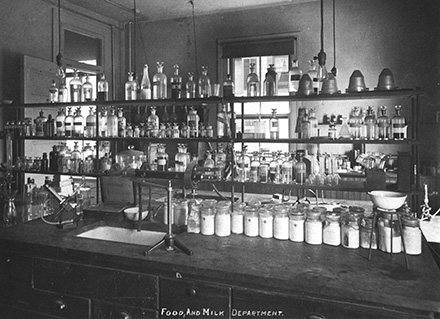 A bill that had been introduced in the Vermont Legislature by the Vermont Medical Society for seven successive sessions finally passed in 1886. The new law created the first statewide public health organization in Vermont, and one of the first in the country. The State Board of Health was made up of three members appointed by the Governor. This first attempt to accumulate facts about diseases and deaths statewide had begun in Vermont 30 years before with the collection of vital statistics.

The Vermont State Laboratory of Hygiene, established by the legislature in 1898, was the third of its kind to be organized in the United States. The laboratory was charged with examining water, milk and all food products for chemical and bacteriological contamination and investigating cases and suspected cases of infectious and contagious diseases. 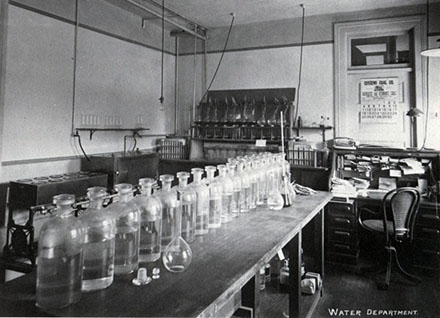 In addition to issuing an order prohibiting any city, town, village, community, public institution or individual from emptying sewage into any body of water used for domestic purposes, the State Board of Health noted in its 1906-01 biennial report: “We are of the opinion that neither individuals nor corporate bodies can ever acquire a right to do or cause to be done any act which shall in any way become detrimental to the public health, or to that of individuals.”

And from the same report: “The gradual increase of mortality from organic heart disease and apoplexy (stroke) emphasizes the necessity of a return to a less strenuous life.”

Laws were passed in 1911 prohibiting the use of the common public drinking cup and the common or roller towel in public places. It became routine practice to apply silver nitrate to newborn babies’ eyes to prevent blindness.

In order to educate Vermonters about “The Great White Plague” — tuberculosis — the State Board of Health purchased in 1912 a moving picture apparatus and a motor generator. This not only enabled them to take the prevention messages to rural Vermont towns that had no electricity, but also made it possible for many people living in these small towns to have their first ever glimpse of a motion picture.

The average life span in 1913 was 48.4 years. Childhood diseases and epidemics of communicable disease which struck young adults still took a large toll of life. There were severe epidemics of influenza and measles this year, with 80 deaths from measles alone. In response to a statewide epidemic of infantile paralysis in 1914 — the first in the country — a private philanthropist anonymously contributed funds to care for polio victims, conduct research and educate physicians. With these funds, the State Board of Health developed the first statewide aftercare polio program in the U.S. and a laboratory for poliomyelitis research. The “Vermont Plan” of aftercare was recognized internationally as a pioneering effort.

After a number of years without an epidemic of smallpox, 12 cases were reported in 1928. Because so many people were not vaccinated, the epidemic spread to 216 individuals by 1929. At the Health Department’s urgings, thousands of Vermonters were vaccinated and the epidemic was over by the end of the year.

Granite workers were protected by a new silicosis control program instituted by the Industrial Hygiene Division in 1937. Based on an agreement between the granite shed operators and the labor unions, new dust control measures, inspection procedures and annual chest x-rays of workers helped to prevent illness associated with “dusty trades”.

The war years brought many changes to public health programs in Vermont. Because of the personnel shortage, some programs were curtailed. Other programs, however, required increased activity due to concerns about security. Protection of the public water supply against sabotage was considered critical. The Division of Sanitary Engineering conducted more frequent inspections of water systems near war industry plants and army bases. Extra safeguards were put in place to guard against interruption of service or contamination. New chemicals and new manufacturing processes related to war industries added to the Industrial Hygiene Division’s responsibility for protecting workers health.

Due to travel restrictions and other factors related to the war, tourism declined markedly, resulting in a decrease of food and lodging licensing. The number of bakery licenses increased, however, and this was partly attributed to the shortage of candy.

The infant mortality rate reached the lowest ever recorded in Vermont, 42.5 deaths per 1000 live births in 1942. By this point in time, the Crippled Children’s Division, which originally cared for infantile paralysis cases only, had expanded to provide treatment for all sorts of crippling conditions in people under the age of 21, and maintained an occupational handicraft program for adult polio victims.

A reorganization of the State Health Board by the legislature in 1949 created the Vermont Department of Health, which replaced the State Board of Health formed in 1886. The governor appointed a sevenmember Health Commission. A public health physician approved by the governor became the first Health Commissioner for the state.

The U.S. Public Health Service conducted an extensive study of silicosis in the Vermont granite cutting sheds as part of a broad investigation of diseases produced by dust. This 1924 study was the first to measure the relation between the environment and the worker’s physical condition. Federal money became available for the first tuberculosis clinics in 1936. X-ray began to be used for diagnosis. Tuberculosis patients spent months, and often years, in sanatoria, rest cures being the most widely used form of treatment at the time. From 1939 to 1942 there were 110 deaths from tuberculosis in Vermont.The legislature revised and consolidated all the existing health laws into one large Act known as the Omnibus Health Bill, passed in 1951. The Public Health Nursing program expanded to cover the entire state. Before this, only about one-third of Vermont towns had received nursing services.

Prior to completion of the new Health Department building on Burlington’s Colchester Avenue in 1953, the Department had occupied an antiquated structure since 1918. A sign on the front of the main portion of the old building read “Oldest Wooden House in Town,1790.”

In 1960, it was noted that no deaths from typhoid fever had been reported.

A study was conducted to evaluate lead exposure to people in conjunction with publication of Vermont’s daily newspapers, in which lead type was still widely used, no exposures considered dangerous to health were found.

A screening program for kidney, heart, diabetes and gout diseases was implemented by the laboratory in 1963. After a couple of years, the program acquired a van and the clinics became mobile, traveling to industries, schools and other community cites to test children and adults. Recreation trends and changes in traveling habits made their impact on the Health Department in the mid 1960s. The majority of new construction was in the ski areas and around larger municipalities, according to the numbers of food and lodging inspections and licenses issued.

In 1952, the City of Burlington became the first Vermont community to provide fluoridated water to its residents. The Centers for Disease Control and Prevention has recognized community water fluoridation as one of the 10 greatest public health achievements of the 20th century.

Pre-operation planning and testing for the Vermont Yankee Nuclear Power plant involved extensive consultation by the Department’s Industrial Hygiene Division (now Occupational and Radiological Health) beginning in 1968. One responsibility was to help set up environmental monitoring stations in the vicinity of the plant site and along the Connecticut river. On November 30 1972, Vermont Yankee began producing power for public consumption.

Vaccine for rubella (German measles) was introduced in 1969. Vermont’s public health nurses conducted an intensive immunization program, vaccinating 39,000 Vermont school children that year. The legislature passed a law in 1979 which made immunization mandatory for people entering school in Vermont.

The law was designed to protect children from common communicable diseases — rubella, measles, diphtheria, tetanus, pertussis (whooping cough) and polio. Following enactment of the law, there has been a dramatic decrease in the number of rubella and measles cases in Vermont. Diphtheria, tetanus and polio cases had already diminished to a very small number even before 1979.

1979 on • Vermont Center for Health Statistics

From 1996 on, the Vermont Center for Health Statistics has continued to grow with the addition of the Vermont Cancer Registry, the Vermont Immunization Registry, the Birth Information Network, Geographic Information Systems (GIS), and analytical support to a variety of newer initiatives (prescription drug monitoring program, End of Life Care (Act 39), hospital and emergency department utilization data, all-payer claims data), as well as several statewide survey programs.

The Vermont State Center for Health Statistics coordinates and responds to the majority of public health data questions (except infectious disease epidemiology).