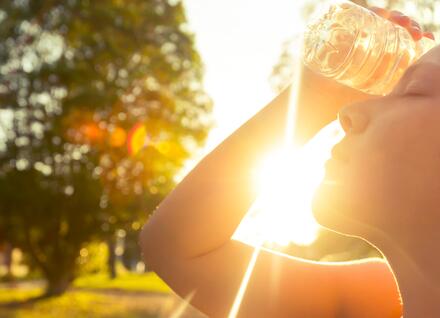 Heat can cause serious illness. Heat illnesses can be deadly. On very hot days, sometimes your body temperature control systems can't keep up and your body temperature can get dangerously high. This makes you at greater risk for serious heat illnesses, including heat exhaustion and heat stroke. Heat stroke is a life-threatening emergency. Dial 9-1-1 or get immediate medical help if you are concerned about your health or someone else's health when it's hot outside.

Find Somewhere to Cool off This Summer

Use the map below to find somewhere to take a break in air conditioning or splash in cool water. Please call the site before you go to confirm it is open and if there are entry fees. If you're going to a lake or pond, be sure to look for cyanobacteria blooms before going in the water. If you need more help finding or getting to a cooling site, please call 2-1-1. Swimming holes are typically not displayed on this map, but they may provide a safe option when following these safety tips.

Are you aware of cooling sites that are not on the map? Please let us know

We'd like to hear from you! Let us know if this map is helpful or if you'd like to share your impressions about cooling sites. Give us your feedback

If the map is not loading, you can try opening it in a new window or see if it will load in a different web browser. If either works, you may need to clear your browser cache. Please let us know if you have problems loading the map.

Some people are at higher risk for heat illnesses

In general, risk for heat illnesses is greater for people with:

People who feel unwell or faint in hot weather are also at risk of serious or deadly falls.

People with chronic conditions may not show typical signs of heat illness, but rather worsened symptoms of their condition. If you or someone you know has a potentially dangerous chronic condition and begins to feel sick during a hot day, pay very close attention. Get immediate medical help if you have concerns about someone's condition.

Heat Safety Tips - How to stay safe when it's hot outside

NEVER leave children, people with disabilities or pets inside a parked vehicle when it's hot. The sun can turn a vehicle into an oven within minutes, even if it doesn’t feel hot outside.

Listen to Your Body

Don't be a Stranger

Preparing your home, community and worksite for hot weather

Modify your home for hot weather

Prepare and protect your community

Everyone is at risk for heat illnesses

Climate change will increase the number of dangerously hot days

Climate models from the Vermont State Climate Office predict 15 to 20 hot days per year by mid-century, and 20 to 34 hot days per year by the end of the century. As the climate warms and there are more hot days, more heat illnesses and deaths will occur. Some of these impacts can be avoided by taking actions to prepare and adapt.