Vaccination coverage, or the percent of people who have received particular vaccines, is measured at national, state and local levels. The Immunization Program reviews data to assess vaccination coverage, identify populations at risk and measure the impact of current initiatives.

Vermont law requires that all regulated center-based and family child care facilities submit annual data on immunization coverage. The 2018-2019 Immunization Survey was conducted through the Department for Children and Families (DCF) and the Child Development Division (CDD) in collaboration with the Department of Health Immunization Program.

In 2018-2019, 95% of all regulated child care programs completed the report. The 997 programs reporting represent 17,822 children younger than age five (approximately 59% of all Vermont children that age) and not enrolled in school, receiving full or part-time care. A limitation of the data is that children may be enrolled in, and reported by, more than one child care program.

The Vermont Department of Health collects vaccination coverage data from all Vermont public and independent schools.

The percentage of Vermont K-12 students receiving all required vaccines remains high, increasing slightly from last year to 94.5%. These are the highest coverage levels reported since K-12 data collection began in 2012. Coverage at individual schools varies widely. See the "VIEW THE 2018-2019 DATA" section below for coverage at each school.

2.3% were provisionally admitted, a 0.2 percentage point decrease from last year. These children were not up-to-date on one or more required vaccines and did not have a signed exemption.

The percentage of K-12 students with a medical exemption remained stable at 0.2%. Religious exemptions increased 0.2 percentage points, to 3.1%. 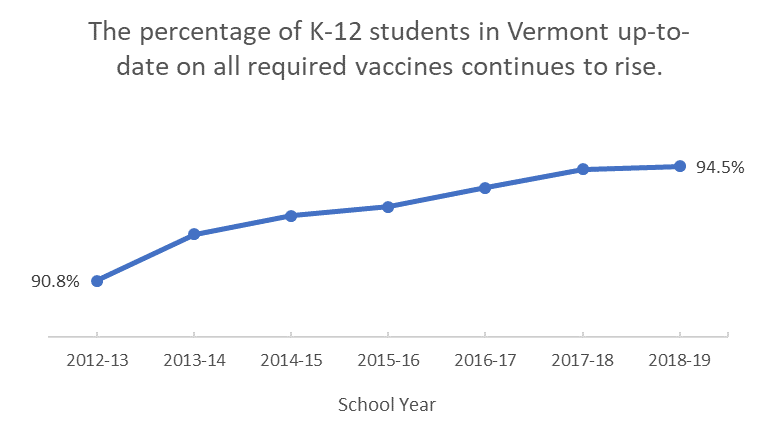 The percentage of Vermont public and independent kindergarten students receiving all required vaccines in the 2018-2019 school year was 90.4%. This is a drop of 0.7 percentage points from last year, when coverage reached a 10-year high, but is consistent with average coverage over the previous two years.

5.1% of kindergarteners were provisionally admitted (not up-to-date on all required vaccines and did not have a signed exemption), the same percentage as last school year. By first grade, provisional admission decreased to 2.3%.

The percentage of kindergarten students with a religious exemption increased 0.8 percentage points from 2017-2018, to 4.4%. However, receiving all required vaccines remains the norm for Vermont kindergarteners, with the large majority not exempted from requirements. Religious exemption levels were higher in independent schools (13.1%; 396 students) than public schools (3.8%; 5,730 students). 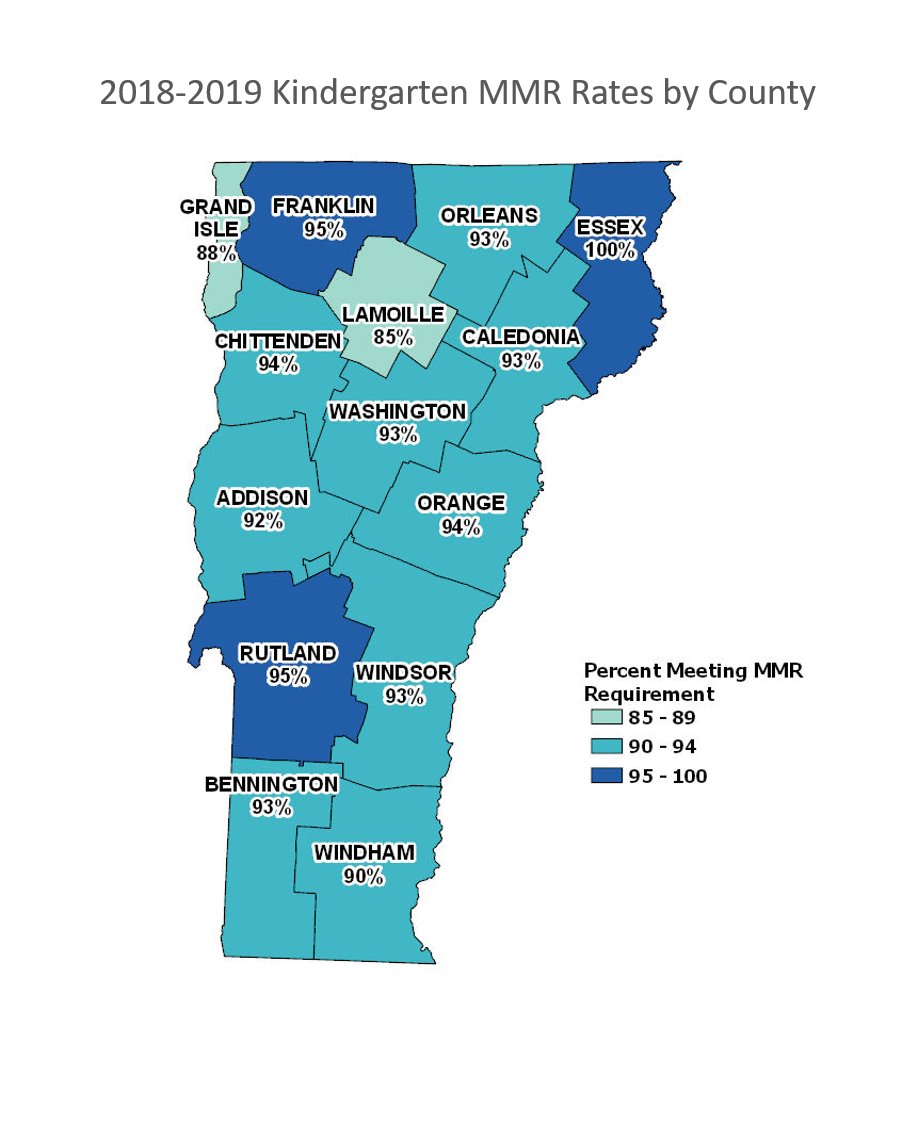 Statewide data submitted for the fall semester of 2018 show that overall 95.9% of college students are fully vaccinated with over 98% meeting the requirement for two doses of measles, mumps and rubella (MMR) vaccine.

Learn more about the BRFSS

The Centers for Disease Control and Prevention (CDC) provides an annual report on Seasonal Flu Vaccination Coverage by age group and season.