BURLINGTON – The annual Rabies Bait Drop, a week-long, cooperative effort between the State of Vermont and U.S. Department of Agriculture (USDA) Wildlife Services to stop the spread of the rabies, starts on August 1.

Rabies vaccine — in the form of a sweet-smelling oral bait that is attractive to raccoons and skunks — will be dropped in rural areas of Vermont from low-flying aircraft and placed by hand in residential centers. Approximately 450,000 quarter-sized blister packs containing rabies vaccine will be distributed in nearly 100 Vermont communities across nine counties. A switch allows pilots to control where the baits fall, in order to avoid roadways, homes and other places where people are most likely to be.

Vermont Public Health Veterinarian Natalie Kwit said the bait packs are not poisonous, and people or animals can’t get rabies from the bait. “The rabies bait packs are not harmful to people, pets or wildlife,” said Dr. Kwit, “but it’s important to leave the packs undisturbed so that they can be eaten by wild animals.”

If a bait must be moved, use gloves or a plastic bag in case the blister pack is damaged. If your pet eats a bait, or if a child brings one home, let officials know by calling the Vermont Rabies Hotline at 1-800-4-RABIES (1-800-472-2437) or call the toll-free number printed on the bait.

Rabies is a deadly viral disease of the brain that infects mammals. It is most often seen in raccoons, skunks, foxes and bats, but unvaccinated pets and livestock can also get rabies.

The virus is spread primarily through the bite of an infected animal. If left untreated, rabies is almost always fatal in humans and animals. However, treatment with the rabies vaccine is nearly 100% effective when given soon after a person is bitten by a rabid animal.

So far this year, five animals in Vermont have tested positive for rabies, three of which have been raccoons.

According to wildlife officials, rabid animals often show a change in their normal behavior, but you cannot tell whether an animal has rabies simply by looking at it. People should not touch or pick up wild animals or strays – even baby animals.

Learn more about rabies in Vermont at healthvermont.gov/rabies. 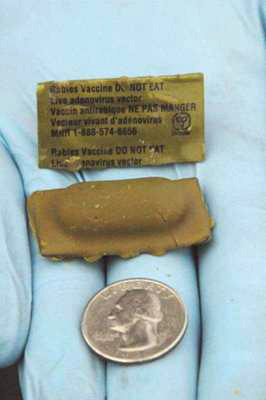 Photo: Example of a rabies bait blister pack.
Image courtesy of Vermont Department of Health
^ Top of the page